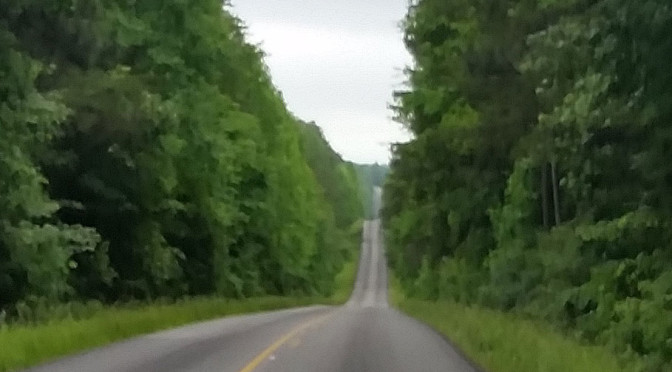 They don’t call it Alabama the Beautiful for nothing. This was an amazing find on my ride up to Northwest Alabama to ride in four new counties for 2015 – Winston, Lawrence, Franklin, and Marion. Along the way, I rode through an amazing series of roads and bridges crossing Smith Lake four different times. When I finally made it up into Bankhead National Forest, once of the first places I saw was the Natural Bridge national recreation area entrance and decided to investigate.

One quick look around and I could tell that this was the way national recreation areas should be – moss covering everything including the pavement. Paths had been cleared from recent tree fall, but mostly overgrown otherwise. No signs indicating where anything was, so when I hopped the curve and headed on a path into the woods I had no idea what I was going to find. At one point the trail went up to the side of a dropoff and I thought that looking back you could see the natural bridge, but as I would soon find out was just a cliff. Through that section I rode some singletrack where the main trail had started to fall off the cliff. Singletrack spur through poison oak/ivy (i.e., lots of three leaved plants). This trail was created to avoid part of the path falling off the side of the cliff.

After taking this pic, I almost turned around thinking that I still had 150 miles left to ride to get home. But the path continued on deeper into the woods, and it was too good of an adventure to pass up. The trail rounded a bend and descended very steeply which was tricky with all the moss covering the path. I stopped to take a picture from down below the overlook thinking that I had been correct and had just ridden across the natural bridge which must have been very large since I didn’t see the other side. Trail and cave wall – at first I thought this was the natural bridge.

The trail kept on going and by this point I had decided to ride it to the very end. Continuing on, the trail switchbacked a couple times descending steeply and rounding a corner where I saw what I thought was a huge cave. I stopped to take this pic below. What looks like a huge cave entrance, but is actually the natural bridge (see next picture)

As I biked up closer to it, I could see that it was actually the natural bridge, so I stopped to take a few pics including the one with my bike at the top of this post. Here is a standalone one of the bridge. Natural bridge with tree snaking up through the gap.

Again, I was amazed because the path kept going and even had a spur that I figured went up to the bridge itself. I continued on the main path, though, wondering what on earth I would find as it continued, but it ended up just making a loop back to the parking lot. I turned around and headed back down so I could take the spur up to the bridge and snapped this picture after reaching the end of the spur. You can see where many people have crossed the bridge making an unofficial path.

After taking the spur, I decided to backtrack my original route so that I would have ridden the loop in both directions completely. The climb out of the canyon was much steeper going back up the way I had originally came but I was able just barely to clear it by staying seated and pedaling very carefully. Here’s a pic looking back at the main loop from the spur up under the bridge. Back out on top of the mountain, I continued on for more than 30 miles through the Bankhead National Forest with lots of fun rollers like the ones shown below and one really cool dirt/gravel road up to the highest point on my route except for the opening climb from my house to the top of Vestavia Dr. County update – this ride took me through four new counties for 2015 – Winston, Lawrence, Franklin, and Marion. These are the four counties in the northwestern (top left) portion of the map below. I saw several signs in Winston County advertising businesses prefixed with the word “Hillcountry”. Looking at my Alabama state map, I think that is probably fair to say that Winston county is the hilliest county in the entire state. Certainly not huge hills, but there is nothing flat in the entire county … no big valleys and its one huge lake is actually a dammed finger lake based on the hilliness surrounding the original river (Clear Creek and Bear Creek) so even the lake itself doesn’t add much to the “flatness” component of the county. Check out the topo maps below (click to enlarge). Zoomed out Alabama county map with route superimposed. The four new counties are in the upper left of the route. (click to enlarge) One thought on “Natural Bridge, Alabama”