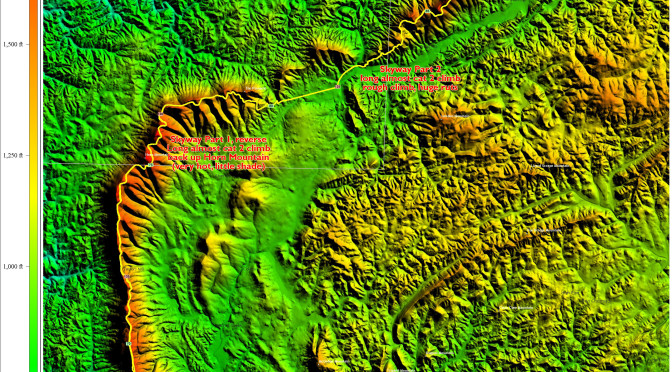 The Skyway Epic 100 mountain bike race definitely lived up to its name on Saturday. I was happy to be racing again this year for the inaugural 100 mile (107.5 miles) version of the race having missed last year after crashing into the side of a car. Being in the final stages of training for the Race Across America, I need to make the most of every minute of bike-related activities. Therefore, I decided to ride my mountain bike down to the start of the race, do the race, and then ride home. This made for a very long 185 mile day on the bike that ended with Kristine driving down to Chelsea to rescue me at the base of the double oak climbs. Overall, it was excellent training for Race Across America, and the race itself was nothing short of epic and awesome.

To get an hour or so extra sleep, I decided to ride straight down 280 thinking that there would be very little traffic at 4 in the morning. I was quite wrong, and the ride to the start of the race was much more nerve-wracking than the ride home as I probably got passed by 200 or more cars, trucks, and semis over the 35 miles or so I was on 280. I didn’t want to spend too much time in the shoulder on the way down fearing a cut in the tires before the race and missing the start, but I wasn’t as concerned about that on the way home so I could ride the shoulder and take some of the side roads on the way back home.

I made the race start just in time to pin on a number, use the bathroom, and roll to the start. I left my bag with my friend Craig Tamburello, owner of Brick Alley Bikes, who closed down his shop all day to help out and watch the race. I decided to go for the hole shot hoping to get a gap large enough to hold off people for at least a while in the singletrack before the reality of this being the first singletrack I’d ridden all year set in. Instead, I ended up third wheel into the singletrack, but thankfully I know Lake Howard well enough now that I could just barely stay within shouting distance of Todd Gearhart (Bicycles Plus) and David Potter (Infinity Cycling) through the 10+ miles of singletrack to open the race.

When we exited the singletrack onto the doubletrack, that’s where we entered the controlled burn the forest service was doing. How is that for epic? Not too much smoke to be debilitating but just enough fire to feel the heat with some of it even smoldering down the middle of the doubletrack!!! I was surprised at how strong Todd and David were hitting up the steep hills thinking that I would be the one pushing the pace but instead I was just hanging on. Eventually we got into a rotation taking us to the bottom of the Skyway cat 2 climb. It was my turn at the front so I pushed the pace hard staying in the big chainring, and by the top Todd had come off the pace a bit.

The mud puddles across the top were huge again this year, but with all the forest service fire activity I think they were drained a bit. Also, there was a lot of extra dirt covering the normally rough dirt fire road so that made some of the descents and climbs much faster. Once we hit AL-77, it was all new course for the race, although I had ridden the next stretch of the skyway one time before and knew that there was a rough almost cat 2 climb from the train tracks before a descent down to Gunters Tn road.

The maps below show why it’s called the skyway – a very long ridge line that towers 1000 feet above the valleys below. Technically, the skyway is a national forest dirt road split up into three sections 600-1, 600-2, and 600-3. I’ve labeled these as Skyway Parts 1, 2, and 3 on the maps. At Gunters Tn, we had the mandatory checkpoint to get a colored zip tie to start a 30 mile loop that included the Adams Gap portion of the Cheaha Challenge as well as a long stretch of forest service rd 637 that made you feel like you were in the high mountains somewhere. Stewart Miller was manning the checkpoint and we were thankful to stop and refuel at the aid station as the temperature had just skyrocketed over the long climb. 30 miles and several pounds lighter from fluid loss, we arrived back at the checkpoint and took our time refilling and trying to psych ourselves up for the rest of the way back to the start.

By this point, I was nearly cracked whereas it seemed David was still riding strong. I had already switched into the mode of thinking if I can just make it to the top of the climb with David, maybe I can recover on the downhill to make it to the top of the next climb. By the time we re-crossed the railroad tracks and AL-77 and started climbing back up Horn Mountain, I was done. The temp on my Garmin reached 104 degF by the top of the climb as there was very little shade (actual air temp was probably in the upper 80s). Towards the top I told David I had to slow down and that he should keep going. I didn’t realize how close we were to the top, but it didn’t matter because almost as soon as David left me I had a full leg locking cramp which forced me to walk the rest of the way up one of the smaller hills across the top.

I re-adjusted my race goal from winning to simply trying to hang on for 2nd. The rollers across the top of the Skyway on the way back aren’t particularly hard if you are fresh, but if you are really tired then they are torture. Finally, I made it back down to Bull’s Gap where I could refill my empty bottles and found a bunch of Hammer gels that had been buried under a pile of cookies. I think I had two of them right there and took three or four for the rest of the race. I also went ahead and filled up both bottles thinking that I would only need one. As it turns out, I was nearly out of water again by the end so I’m glad I filled up both bottles rather than trying to save a little weight by only filling one.

For the rest of the race, I tried to find the pace just under the start of a cramp, but just over a slow crawl. I was also hoping that race director Brent Marshall would have mercy on us and cut out the doubletrack and most of the singletrack and route us on Forest Service roads to the short final section of singletrack. Nope … we went back over the exact same stretch of doubletrack and singletrack that we used at the start with only one of the Lake Howard lobes (a few miles) of singletrack cutoff. I’m glad he did, though, because I was able to do the creek crossing and super steep climb without cramping or falling over. Plus, I did enjoy the singletrack since I wasn’t trying to catch anyone and confident enough by this point of a time gap that I wasn’t having to take any risks on the trail.

David was indeed still riding strong as he put 11 minutes into me over the closing 20 miles of the race. Here is a picture of us shortly after I had finished and shortly before third place finisher Eric Nelson crossed the line. Eric had missed the turn back onto the double-track and ended up riding 110 miles total for his race. It would have been much closer of a battle for 2nd if he hadn’t missed that turn … whew!

I took that second picture sometime during the long time (maybe 20 minutes?) I spent sitting on the ground recapping the race with everyone. I tried a couple times to get up but as soon as I started to move, my legs would start to lock up. Eventually, I rolled into a position where I could get up and started to realize the challenge ahead of trying to bike all the way home.

I had been planning to do a radio tower climb (Flagpole Mountain) between Sylacauga and Childersburg, but I had already scratched that from the plan even before the race was over. Then I had planned on taking my normal road route home which only involves a short section of 280. As I started to ride, I realized that if I was going to make it all the way home I would pretty much need to ride straight down 280 again. I actually felt OK until I got to old 280 outside of Chelsea where the route starts to cross some longer hills. I knew by this point it wasn’t worth it to try to make it all the way home riding well into night again so I called Kristine to ask her to come pick me up at the Chelsea Sonic.

It’s hard to describe how meaningful the Chelsea Sonic and the Talladega McDonald’s are to me, but let’s just say that the Chelsea Sonic has probably saved me from heat exhaustion once or twice and the Talladega McDonald’s from hypothermia/frostbite numerous times. Also, numerous times I have been deep into a ride thinking “just make it to the Sonic, just make it to the Sonic, just make it to the Sonic…”. When my jaw was wired shut so that I couldn’t even take in gels during a ride, I had to rely on milkshakes where I could shove the straw all the way to the back of my mouth behind my teeth for nutrition on five, six hour rides last summer. The Chelsea Sonic was usually my last refueling stop on my way home. So I was not disappointed at all that Kristine had to come pick me up short of home, but rather elated that we got to be there at the Sonic at the same time when I was exhausted and done. For better or for worse…

Finally, here is all my data from the race!

Heartrate data for the entire day (click to enlarge)